Shakespeare On Film - A Reference Guide

Hey guys! So a friend of mine asked me to put together a list of the best film versions of Shakespeare's plays. This is the (very thorough) result. Thought it might be helpful to some of you out there. :)

So, to make it easier I'm going to categorize the plays in terms of genre (comedy, tragedy, history, romance.) However, I highly suggest you start by watching "Looking For Richard" - a documentary by Al Pacino where he, and a bunch of friends go to England to analyze "Richard the 3rd." Not only do you get wonderfully acted scenes, you get a brilliant analysis of the play, British monarchical history, and Shakespearian text analysis. The truth is, basically all of Shakespeare's histories are chronological, so if you get a good solid understanding of the history behind the stories, the plays will make a lot more sense. And if you understand the War of the Roses (which plays a big part in "Richard the 3rd") you'll understand a lot of what's going on in the other histories. Also, when in doubt, check this out: http://www.imdb.com/title/tt0079378/. Not the best, but filmed (I believe) RSC productions of ALL of Shakespeare’s plays. (I think the link is to the “Tragedies” set – but they have sets for the comedies and histories too…)

P.S – this is an amazing site that lists every male monologue (link to the girls is in the top left corner) in every Shakespeare play: http://www.shakespeare-monologues.org/men

A Shakespearian tragedy is defined as a play where the principle character has a "tragic flaw" that leads to their demise - usually death. To be a true tragedy there cannot be a wedding at the end, and must include the deaths of multiple characters.

And lets get off to a solid start with:

There are too many filmed versions of "Hamlet" to count. I think the contemporary ones will do the most good as you wont have to wade through retro stylized acting. If you want to check out the “greats” (esp. Laurence Olivier,) I would suggest watching clips on youtube – not hunting down the full movie.

There are three main contemporary films of "Hamlet":

The "Mel Gibson" one: It's actually not as bad as people think it is, but it's not terribly good either. For me, the main reason to watch this one is for Helena Bonham Carter's Ophelia. My absolute favorite. 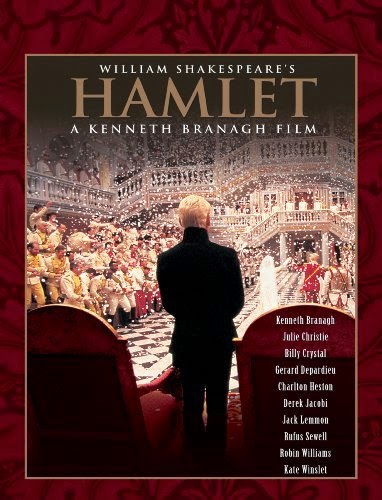 The "Kenneth Branagh" one: This is an important one, as it's the only film version that leaves in every line of text from the first folio. It's not cut in any way. The downside of this is that it's like 3-4 hours long...but you will get "Hamlet" in its entirety. My favorite part of this version is the amazing casting of the "cameo" roles - these side characters have never been played better.

The "David Tennant" one: I may get some flack for this, but personally this is my favorite filmed version of "Hamlet." It is literally a filmed version (on a set, not a theater) of the RSC production from a couple years back. Tennant is lovely as Hamlet, and Patrick Stewart plays both King Hamlet, and Claudius - and is tremendous! Because this is based on the stage play it has much more of the feel the play was meant to have - being performed intimately on one set in a theater. They also make some beautiful, bold choices regarding surveillance in this world, and I think a lot of things are very very clear that can sometimes get muddied in other versions.

Ethan Hawke also did a "contemporary" filmed version of "Hamlet" that might make the story VERY clear set in modern day, but the aesthetic is so muddy I can't in good conscience recommend it...

There is also a National Theater Live production, but that's not my favorite either... 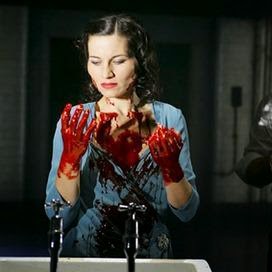 I honestly think the absolute best version is the film of the Patrick Stewart, Kate Fleetwood production that was at the RSC, and Broadway. http://www.imdb.com/title/tt1570337/. Stunning, clear, and terrifying. It’s also the only recent film version of the play. I will warn you there is some scene rearranging (mainly in reversing Act 1 scenes 1, and 2) and though I think it’s done to brilliant effect, it’s not as the piece exists in the first folio.

There's also a very interesting production that was directed by Teller (of Penn and Teller fame.) I'm not a big fan of the actual performances, but Teller uses state of the art illusion work that is just spectacular, and does wonders to illuminate certain parts of the play.

Truth be told, there’s no good movie version of this one. If you really want to watch something, check out the 1983 Olivier one: http://www.imdb.com/title/tt0087561/, but it’s not the best.

There is however a very interesting filmed version of the recent National Theater production directed by Sam Mendes. It's screened in movie theaters across America and the UK as part of the National Theater Live series, however you can't buy or rent it. This version has a fantastic cast, and is set in a totalitarian state that seeks to explore a deeper reasoning behind Cordelia's very public standing up to her father.

NOTE: Hamlet, Macbeth, and King Lear make up the basis of seasons 1-3 of “Slings and Arrows.” Truthfully – watch those three seasons, and you’ll understand the plays VERY well (and have a lot of fun.)

Though it of course doesn’t tell the full story, you MUST watch “Stage Beauty." Though they only do a couple scenes – it’s the best “Othello” I’ve seen on film.

I’m really not a big fan of other “Othello’s” on film. The one I would most recommend, though I hesitate, as it doesn’t use the original text, is a movie called “O” that is a modern retelling.

If you just want the full thing, text and all on film watch the Laurence Fishburne, Kenneth Branagh 1995 one: http://www.imdb.com/title/tt0114057/ . They do a good job telling the story very clearly with the original language.

There is also an interesting National Theater Live production of Othello set against the backdrop of the Iraq war.

For a stunning version of what the play has always classically been: Franco Zeffirelli’s. The thing I love about this version is he cast an age appropriate Romeo and Juliet, and let them be passionately in love – they literally can’t keep their hands off each other.

However, be warned that both these versions have been cut – most blatantly in the exclusion of one of my all time favorite moments in the Shakespearian cannon: Juliet’s potion monologue. For that alone, I would watch the filmed version of the Stratford production starring Megan Follows (of “Anne of Green Gables” fame). The production is not very good – and Megan Follows is NOT comfortable with the text – but I’m in love with the director’s interpretation of that potion monologue:

Honestly, really no filmed versions. A couple of TV movies, and filmed live stage productions, but nothing of note…

Actually, there’s a film coming out this December (though it was filmed a few years ago) directed by, and starring Ralph Fiennes. Other than this, see above.

A Shakespearian comedy is defined as a play ending with a wedding. Seriously.

Honestly, my favorite, though very dated is the 1935 version in which a 10 or so year old Mickey Rooney made his film debut as Puck. http://www.imdb.com/title/tt0026714/

There is the more recent version: http://www.imdb.com/title/tt0140379/ - but honestly, except for the wonderful Bill Irwin, who’s almost never on screen, I find it hard to get through… 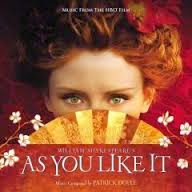 Really, only one film version. Not the best, but thanks to Bryce Dallas Howard it does what it needs to: http://www.imdb.com/title/tt0450972/, though why Kenneth Branagh decided to set it in Japan with an all white cast is beyond me…

To my knowledge, there is one, literally one film version of this play. It was done by Kenneth Branagh, stars Alicia Silverstone, and is done as a 1930’s musical. Proceed at your own risk:http://www.imdb.com/title/tt0182295/

No good film version. The only one to my knowledge was done in 2006 – and is even scarier than the Silverstone version above. Hence, no link. There are limits. LOL.

Much Ado About Nothing

The Brannagh version. I personally love it. A lot of people hate it.

You can also download from Digital Theater Live the West End production starring David Tennant and Chatherine Tate. I may get some flack for this as well, but Tennant and Tate are my all time favorite Beatrice and Benedict. I don't think you can top them. The rest of the production though leaves something to be desired.

The Comedy of Errors

Now this is random – but I find the funnest version outside of a live production is the musical “The Boys from Syracuse” by Rodgers and Heart. Lovely, clear story, and funny. But no good film version.

The Merchant of Venice

The only real film version is the recent Al Pacino one. It’s not brilliant, but it’s not bad.

The Taming of the Shrew 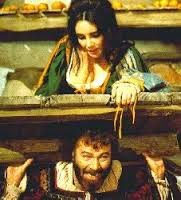 Film wise, have to go with the Elizabeth Taylor, Richard Burton version.

There is also a very fun modern retelling (though it doesn’t use the original text) starring Heath Ledger called “Ten Things I Hate About You."

However, there’s a wonderful musical called “Kiss Me Kate” by Cole Porter that’s a retelling set backstage during a Broadway show set in the 30’s. The “cast” is doing a musical based on “Taming” and their backstage lives reflect their onstage characters.

My favorite comedy. Unless you count the Amanda Bynes modern remake “She’s The Man”, there’s literally only one film version.: http://www.imdb.com/title/tt0117991/. Have MAJOR issues with Imogen Stubbs in one of my all time favorite Shakespearian roles, but Helena Bonham Carter and Ben Kingsley make up quite a bit of the slack.

Containing one of the funniest monologues ever (if delivered properly.) Unfortunately, no good film version.

The Romances, or “problem plays.”

A Shakespearian romance is defined as a comedy that doesn’t end with a wedding, but where the protagonist doesn’t have/overcomes their fatal flaw. These are often called the “problem plays” because they are genre bending – not quite a tragedy or a comedy.

My fav. In essence, it’s Shakespeare does Snow White. No good film version, but there are clips of Helen Mirren playing Imogen on youtube. Though it’s a VERY dull production.

Oddly so many TERRIBLE film versions. My personal fav is “Forbidden Planet” – a 1950’s B-sci fi reimagining of the story set in space. It’s also a jukebox musical (called "RETURN to the Forbidden Planet"). Gotta love it.

There’s the recent Julie Taymor film, but in changing Prospero to ProsperA they LITERALLY wrote new text to explain the character being a woman. Yes, they hired someone to write new Shakespearian verse to stick into the play.

Then there’ a REALLY weird 80’s reimagining starring Molly Ringwald, and Susan Sarandon:http://www.imdb.com/title/tt0084776/

Both parts are part of the wonderful Hollow Crown series directed by Sam Mendes.

The Kenneth Branagh film. All right.

There is a brilliant filmed version of the RSC production starring David Tennant.

There is also a great film version by Sam Mendes as part of The Hollow Crown series.

My fav. History. Watch “Looking For Richard” (see above.)

Also love Ian McKellen’s version, especially the Lady Anne scene which he sets in a morgue.
Posted by Ashley Griffin at 2:34 PM No comments: